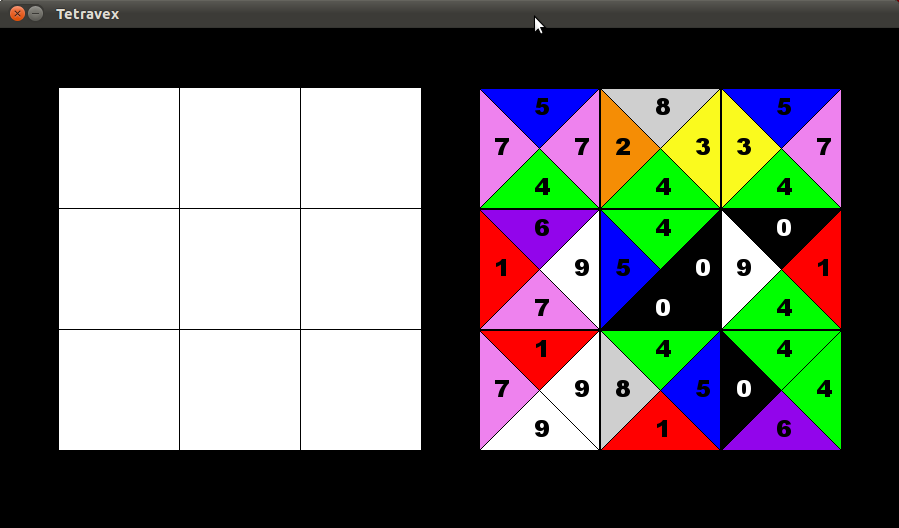 After much gnashing of teeth, I got Games::Tetravex working earlier this week. This a Perl implementation of tetravex using SDL and MooseX::Declare. As my first foray into both SDL and Moose, as well as the first game programming I have done since college, I thought it would be useful to lay out my impressions.

I’m pretty ignorant when it comes to graphics libraries. I did a little bit of game design in college in Java, but nothing with any depth. My crowning achievement was a half-working, four player, networked pong that I wrote in a two night code flurry. Then we got our grade and I never looked at the code again. With such little experience my first task was locating some tutorials. Luckily, I stumbled on SDL_Manual which, while not great, gave me enough of a primer to get started.

As far as actually using SDL for Games::Tetravex, it was pretty easy. It required me to start thinking in terms of (x, y) coordinates again, but, armed with some scrap paper, I was able plot out most of my canvas fairly quickly. It’s by no means pretty, but it does the job. I was quite happy with the SDLx::App and SDLx::Controller wrapper modules, as these made writing the actual game loop a piece cake. It becomes as simple as creating the app, registering some event callbacks, and calling run. Very nice.

To me, Moose is what gives Perl a future. Without a full featured OO framework it will be difficult to attract young developers to the language and Moose delivers the goods. My usage in this project is primitive, but I still came away with a good impression. I started the project as just one big script until I got a handle on what exactly I wanted to do. At that point I started refactoring using MooseX::Declare and was very pleased with the final result. In truth, the use of MooseX::Declare was complete overkill for a project of this size, but I figured I might as well jump into the deep end of the pool and see what happens.

It wasn’t all fun though. The big issue is the stack traces MooseX::Declare returns whenever you have some sort of parse error. They’re awful. Very rarely did they give any information about where the parse failed. I had to resort to commenting out large blocks of code until the program would run again. That was the only pain point I ran into, but it was a doozy. I’m sure there is useful information buried in there, but a stack trace of over a hundred lines with no useful summary is a problem.

There is still a lot left to do. The big one is that you can only play a 3x3 grid. After that it needs a lot of spit and polish, such as

and a bunch more I’m forgetting right now. We’ll see how much I actually get to before my eye starts wandering to some new piece of shiny I want to learn.

Code available on github at https://github.com/CuriousCurmudgeon/Games—Tetravex.