Setting Up ABP With OpenIddict on Azure App Services

In prep for building a SaaS product, I’ve been spending a lot of time the past couple of weeks getting familiar with ABP Framework. ABP builds on top of ASP.NET Core to provide “complete infrastructure to create modern web applications by following the best practices and conventions of software development.” As a solo dev, I don’t want to spend all of my time rebuilding common infrastructure, so I’m relying on ABP to provide that for me so I can concentrate on business concerns.

The community is currently in a bit of flux around authentication, so I decided to jump in with the latest version, 6.0.0-rc3. This release switches from IdentityServer4 to OpenIddict for authentication. The gory details for this switch are available on GitHub.

This generated a solution with a lot of projects. I passed -u to use Blazor as my front end and --preview to get the latest release candidate. ABP’s structure is pretty is pretty complicated, but I was focused only on getting the API project deployed to Azure as an App Service. The Blazor client will use this for project for authentication.

This was one of the few times in my career that I Googled a .NET exception and came up with almost no results. Luckily, I was able to find an issue in the ABP repo to get started.

Why Do We Need Certificates

OpenIddict is a solution to implement OpenID Connect client, server, and token validation in .NET. As part of this, it uses two types of credentials, encryption and signing.

For local development, I was using the default development and encryption certificates. ABP turns those on by default, but they don’t work in Azure.

OpenIddict helpfully provides some code to generate certificates. The samples use empty passwords, but this won’t work in Azure. Azure requires that your certificates be generated with a password. I generated an encryption certificate with

And a signing certificate with

Now that I had generated by encryption and signing certificates, I needed to upload them to Azure. Luckily, the documentation for this is pretty good. Go to your Azure App Service and either navigate to TLS/SSL Settings -> Private Key Certificates like in the the docs, or go directly to Certificates (preview). From there you can upload each certificate.

Note the thumbprint of each certificate for later. You will need it load the certificate at runtime. 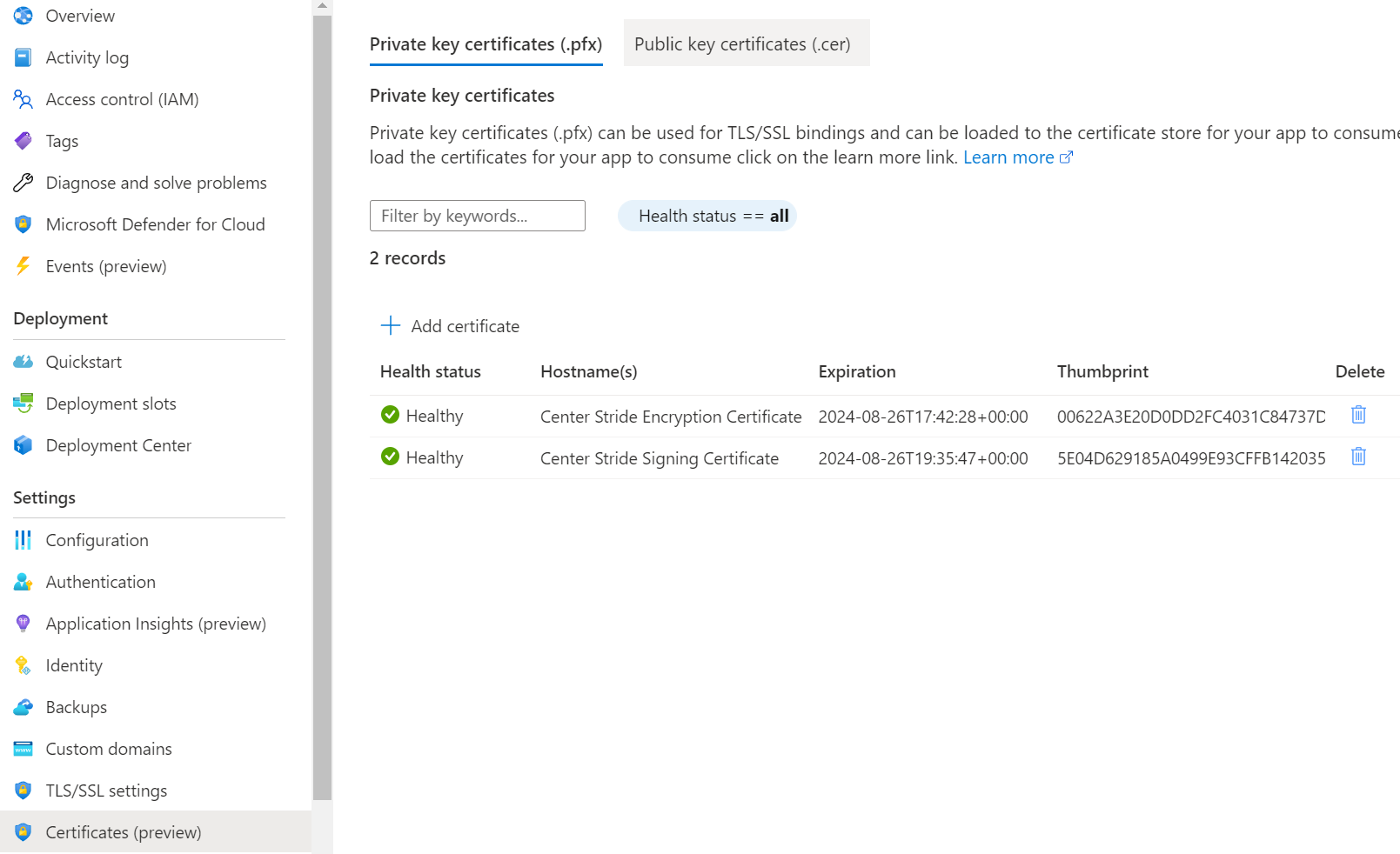 Out of the box, ABP’s OpenIddictServerModule is using OpenIddict’s default certificates, but I needed to load the certificates I had generated and uploaded to Azure instead.

The way certificates are loaded varies by App Service platform. I’m using Linux, but full instructions for both Windows and Linux platforms are available.

I could have also used the App Service’s Configuration screen in the Azure Portal. In either case, I had two certificates and I wanted to load both of them, so I used * instead of directly adding each thumbprint. If you want to be more selective, then you will need the individual thumbprints for each certificate that you want to load.

The final step was to customize my apps CenterStrideHttpApiHostModule to load the certificate. The Azure documentation once again was pretty good and showed the correct file path to use on each platform.

I added the thumbprints for each certificate to my appsettings.production.json. /var/ssl/private is the directory where those certificates can be loaded from because I earlier set the WEBSITE_LOAD_CERTIFICATES app setting.

With all of this done, I was able to deploy my ABP API app to my Azure App Service and successfully load certificates.

It took me an entire day to figure all of this out. That was partly due to unfamiliarity with both API and OpenIddict and silly mistakes on my part. I was able to get it all working though with a good understanding of each part. At multiple points I was confused enough that I was referring to both ABP and OpenIddict source code. When in doubt, pull down the code and dive in.